Playing deep into the night

Stained glass exploding with color inside the Old State Capitol

The Mississippi River and the Baton Rouge skyline

The Horace Wilkinson Bridge illuminated over the Mississippi River

The starting line of the Louisiana Marathon

Experience the flavors, sights and history

Whether it’s Mardi Gras, the vivid food and music, or the tradition of tailgating at an LSU or Southern University football game, Baton Rouge takes advantage of every opportunity to revel in the good times. One of the most historic, vibrant and unforgettable cities in the South, it’s a place where Blues festivals and beignets are as beloved as football, where you can shop one day at the Mall of Louisiana and keep it local at the farmers market the next. Here the history is as rich as the flavors, with plantations, memorials and museums bringing the character of the city to life, and hundreds of restaurants dishing it up on a plate.

Dive into the colorful history of Louisiana politics at the Old State Capitol and the Old Governor’s Mansion. Get a bird’s-eye view of the city from the observation deck of the 34-story Louisiana State Capitol, walk through grand Memorial Hall, and stroll the grounds, which include several native Louisiana plants. Soak in the culture at the Capitol Park Museum before heading to the Louisiana Art & Science Museum, where you can explore everything from Ancient Egypt to the solar system. The USS Kidd Veterans Museum lets you hit the deck of a Fletcher-class destroyer vessel from World War II, which doubles as a museum and memorial to the U.S. armed forces.

People come to Baton Rouge for many reasons, but they all come to feast on delicious Louisiana cuisine at one of 400 restaurants. Check out the cafes, restaurants and food trucks that serve everything from traditional Creole cuisine to trendy tapas. Want to fetch your own ingredients? Visit the Red Stick Farmers Market. For a blend of nature and culture, stop in to Bluebonnet Swamp Nature Center, a huge preserve that features animal, ecology and art exhibits as well as a winding boardwalk that takes visitors through cypress swamps and hardwood forests. Don’t leave Baton Rouge without enjoying the music scene. From the soulful sounds of gospel and blues to country, Cajun and zydeco, Baton Rouge has a sound for everyone.

We inspire tourists to visit and work with the travel industry to promote this destination worldwide.
For general inquiries and travel information:
Send email
Phone:
(225) 382-3573
Web:
https://www.visitbatonrouge.com/travel-pros/

The state capitol in Baton Rouge is the tallest in the nation, at 137 meters.

On a Saturday night in LSU's Tiger Stadium in 1988, fans were so loud at the LSU vs. Auburn game that the seismograph on campus registered it as an earthquake. This game is now famously known as "The Earthquake Game."

See Louisiana Through the Eyes of Musician Tab Benoit

Lafayette, Louisiana: The Heart of Cajun and Creole Country

Bayou Lafourche: Adventure and Culture in a Cajun Vacation

How to Spend a Weekend in New Orleans, Louisiana

New Orleans, Louisiana: Get to Know These 4 Music Hot Spots 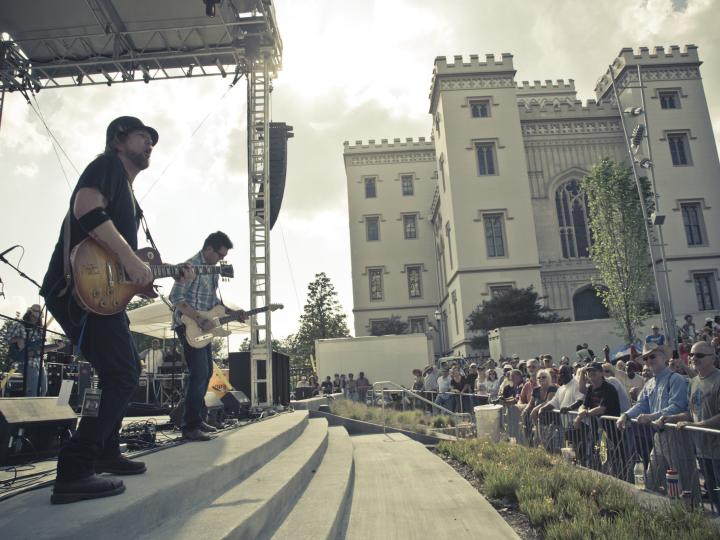